Deprecated: Return type of Requests_Utility_CaseInsensitiveDictionary::getIterator() should either be compatible with IteratorAggregate::getIterator(): Traversable, or the #[\ReturnTypeWillChange] attribute should be used to temporarily suppress the notice in /home/salumana/public_html/wp-includes/Requests/Utility/CaseInsensitiveDictionary.php on line 91
 Sal Umana – Spirituality on terrorism and any pandemic
Skip to content 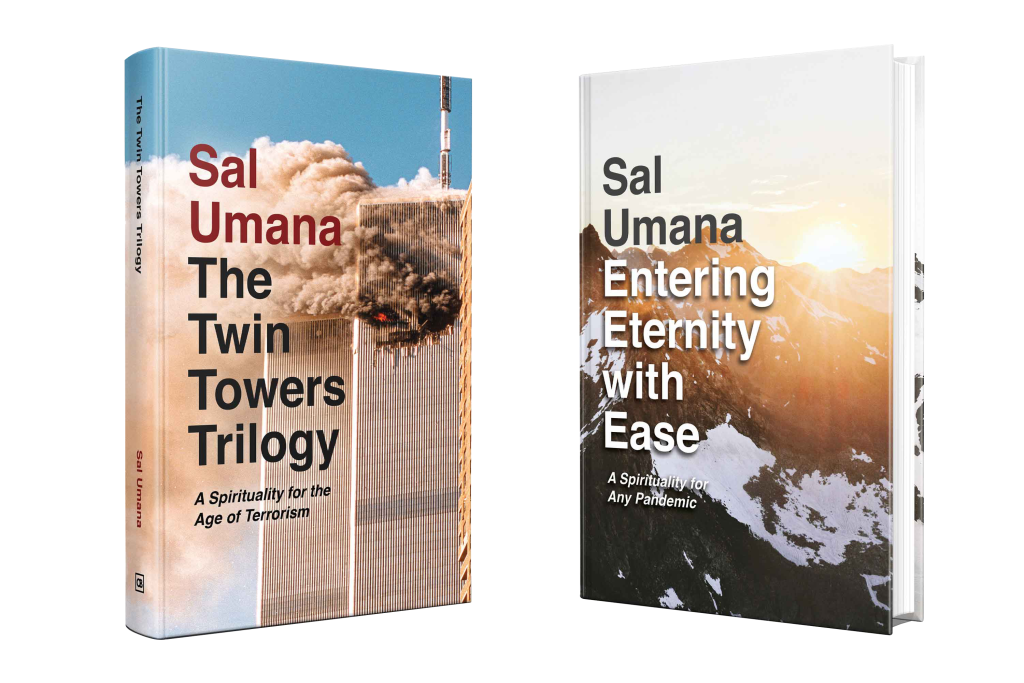 My Four Books are all in sequence and probably should be called a quadrilogy. They began when I was stranded in Monterey, California on Tuesday, September 11, 2001, and had to drive 3,000 miles back to New York. My story continued through the American Wars in Afghanistan and Iraq, the Great Recession of 2008, culminating in the COVID-19 pandemic of 2020, and now in the throes of the biggest public protests against police brutality in 50 years. The story of every human being on the planet can be told through the wars, pandemics, assassinations, and world-wide convulsions that surround their individual and social lives. This is doubly true of me. I was born in the shadow of the 1929 Stock market crash and lived through the Great Depression, World War II, the Cuban missile crisis, and the assassinations of John, Martin, and Robert. Just when it seemed that a modicum of One World Spirit had finally arrived with the collapse of the Soviet Empire, a Muslim group called Al Qaeda, pulled off a remarkable terrorist attack on America, using our own technology, our own planes, our own fuel to blast down the two tallest buildings in the world. They began the 21st Century with a statement that the 20th and American century was over.

The real-time history that I was living through was a trauma that I felt in my bosom, in my brain, in the depths of my mystical awareness. But since I am a mystic, I sensed intuitively that the trauma I was experiencing was more than political, more than economic, more than environmental: it was physical, and it was metaphysical, and thus spiritual, and sinking to the depths of the soul. Because of all the enlightenment and awakening that I had experienced in 73 years, up to 9/11, I immediately perceived the collapse of the World Trade Center in New York as the grave of God. Why? Because I was a cradle Catholic, who entered the seminary at age thirteen, served in the priesthood for 24 years, left the active ministry because I was strongly sensing that the God I had grown up with and served no longer existed as I imagined Him to be. When I read the diary of one of the hijacking terrorists in which he writes that he is committing this suicidal destruction in the name of God, I knew that both his God and my God never really existed. I wrote later about “The God Who Never Was.” In my first book, The Day God Died, I imagined a “God” coming to me for therapy with an identity crisis. “She,” I provocatively called her was having an identity crisis, because She had no idea what “God” or “Allah” the Muslims were talking about, or even what “God” President Bush was talking about in his war of “Infinite Justice” against the terrorists. The therapy I did on God turned out well because “God” was restored to the original Christian idea of “Love”:  love as among humans, love for the planet and all it’s creatures, extending to the entire endless universe.

The second book, The Day My Ego Died was about Ego as a false self that all humans develop in every social environment in order to be accepted. In the first book I made the case that God is not a person in the human sense of person, therefore “He” does not have an Ego. So, if we are made in the image and likeness of God, as the Bible says, then neither should we have an Ego. Thus, the only path to human happiness is to go through the “Dark Night of the Ego” and find our true self as an awareness of our interdependence on all reality outside our “self.” As one saying goes, “Love is the realization that something other than one’s self is real.”

In the third book, Back To Earth, I primarily said that we have to die to our false-self Ego as a way of entering heaven now before we die.

In my fourth book, Entering Eternity With Ease, I elaborated on the idea that we do not have to wait until we die to get to heaven. First, we have to let go of our Ego and understand through mindfulness that we are simply an eternal awareness of living in love. Secondly, we have to see that there is only one world, not two worlds. We were taught that there are two worlds: a here and a hereafter. Regardless of how we picture the two worlds (material vs spiritual, temporal vs eternal, finite vs infinite), there is only one world, one universe, and it is made of matter. Besides losing our Ego, we have to see the convergence of time and eternity in one. We have to accept the mysterious reality that past, present, and future are all one in the Eternal Now which is another name for “God.” 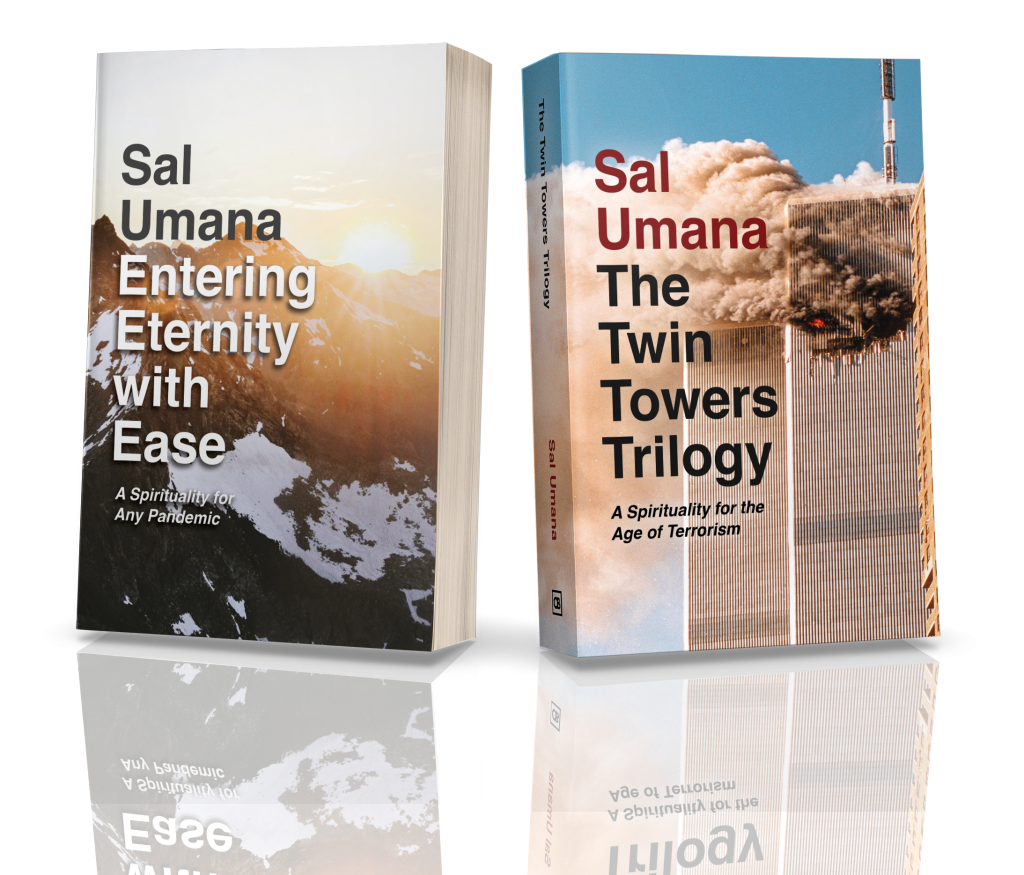 For nine years since completing my trilogy, I wanted to say more about dying. When I reached my ninetieth birthday, my editor asked me to write another book, and immediately it rose up in my heart, and I wrote for almost a year. Then, a month into the global pandemic caused by COVID-19, I added “A Spirituality for Any Pandemic.” I spoke about my experiences with dying loved ones and then about the denial of death in our death-phobic society. From a society that lives in denial of death, I moved to denial of life. After 35 years of psychotherapy practice, listening to how depressed, anxious, and angry so many people are, I am convinced that most of us are not enjoying our brief time on this planet. We spend most of our lives taking drugs from nicotine, caffeine, cannabis, and alcohol, to heroin and cocaine, and lately, designer drugs 100 times more potent than the former. All of these substances are abused in order to drown out feelings of aliveness. Many people think they are consuming drugs to feel better, but really they are hastening their departure from life. For years, all we heard from public media was: “Get a life!”. This was a typical American platitude. You cannot aggressively grab a life, when you are already exquisitely alive but cannot know it, because you have wasted your precious life listening to depressing recordings in your head of past hurts and shame, and future fears and anxieties.  So before we can even imagine approaching death joyfully, with eyes wide open, we have to discover what it means to be human, what it means to be truly alive in the present moment, which is all we really have.

In The Twin Towers Trilogy, Sal Umana combines three books: The Day God Died, The Day My Ego Died, and Back To Earth. In The Day God Died, the author imagines God coming to him for psychotherapy, suffering an identity crisis. From September 11, 2001, to December 11, 2001, God comes for therapy once a week. In the course of treatment, God discovers that the old masculine tribal God of monotheism has been foisted on Her by the three great religions of the western world, while all spiritual people, both East and West, have always experienced God as Love in one way or another, even if in the form of cherished ancestors like Asian and African religions. In a final surprise session, God divulges who She really is…and who we are.

In the second book, The Day My Ego Died, the author, suffering an identity crisis himself, goes to his imagined God for therapy, and ends up as a Zen Buddhist without an Ego.

This should have been enough, but along comes the tenth anniversary of the twin towers tragedy. And after ten years of denouncing the war on terrorism as a fraud perpetrated on the USA by the military-industrial complex and the American imperialists, Sal sees a team of Navy Seals wipe out Osama Bin Laden and we are back to Christian triumphalist revenge. So Sal, a member of “Pax Christi,” a Christian pacifist movement, had to write a third book on Spirituality In the Age of Terrorism, which he titled simply Back To Earth.

First, he had to explain the “God who never was.” (But if that God never was, what is to explain?) Then, of course, Sal explained the “God who always was.” Although “It” is unexplainable? But, actually, God was fine. It was Sal’s not-quite-dead Ego that needed some work. (Full disclosure:  it still does.) This he expands upon in The Dark Night of the Ego, and Living Without Ego, which is really about the Oneness of Being, and how we have to love our neighbor as our self because he/she IS our self. If this doesn’t make sense to you, maybe you should read the book.